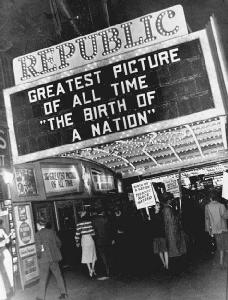 “​​The very name of The Birth of a Nation is an insult to Washington, who believed that a nation, not merely a congeries of independent states, was born during the common struggles of the Revolutionary War, and devoted himself to cementing the union… This nation of ours was not born between 1861 and 1865, and no one will profit from trying to pervert history.”

"Our picture tells its own story and we are willing to stand upon the verdict of the New York public as to the fitness of this work of art to be judged as a drama of action based upon the authenticated history of the period covering the action of our plot."