As a classified unit, much of their work went undocumented and unheard, but it was for a good reason. If the MIS was a declassified unit, the Japanese might have started to code their transmissions and battle plans. The other Americans would have been in more fear of Japanese Americans sabotaging America through translation and holding essential documents. Before declassifying the documents, time needed to pass.

In 1972, the contributions of the MIS were brought to light. President Nixon signed Executive Order 11652, declassifying all WWII military intelligence documents, including those of the MIS. ​​​​​​​

However, it would be another 28 years until their contributions to America’s victory were formally recognized. The MIS received a Presidential Unit Citation in 2000 “for outstanding and gallant performance of duty in action against enemies of the United States from May 1, 1942 to September 2, 1945”.

Their stories are still being shared and brought to life by organizations such as the National Japanese American Historical Society with their MIS Historic Learning Center. Today, we can learn from the MIS soldiers to use culture and language as a means of peace in areas like the middle east. America has the diversity and the capability to be a bridge of understanding between many countries. The MIS soldiers have taught us that the quickest way to end a conflict is through peace, not war. ​​​​​​​ 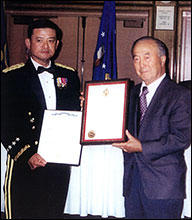 AFTER THE WAR
HOME
RESEARCH