IMPACT - THE EFFECTS OF BESSIE'S BRAVERY

BESSIE'S LEGACY
​​​​​​​
​​​​Even though Bessie Coleman did not complete her dream of opening an aviation school for African Americans, the impact Bessie made paved the way for future African-American aviationists such as the Tuskegee Airmen, the Five Blackbirds, the Flying Hobos and the Bessie Coleman Aviators Club. However, not many recognitions of Bessie's accomplishments appeared in the immediate years following her death. In 1995, the U.S. Postal Service issued a Bessie Coleman stamp (69 years after her death) commemorating “...her singular accomplishment in becoming the world’s first African American pilot and, by definition, an American legend.” ("Coleman, Bessie." National Aviation Hall of Fame [NAHF]) Bessie was enshrined in the NAHF in 2006 (40 years after NAHF’s founding and 80 years after Bessie's death).

In 1931, The Five Blackbirds, also referred to as "Race Pilots", became the first all-black aerobatic troupe in history.

"The expression [Race Pilots] had nothing to do with breaking speed barriers. More than two decades after the Wright brothers made history, only one African American, Bessie Coleman, possessed an international pilot’s license...It was the era of Jim Crow laws, which strictly enforced racial separation...Airlines wouldn’t even allow black people as passengers. And very few flight schools were willing to accept black students. That didn’t sit well with William Powell [founder of The Five Blackbirds], who sought to expose more African Americans to the art of flying. In the process he inspired blacks to take a greater role in aviation, and along the way he formed history’s first all-black aerobatic team." ("Blackbirds and the Colored Air Circus of 1931." ​​​​​​​Air Facts Journal) 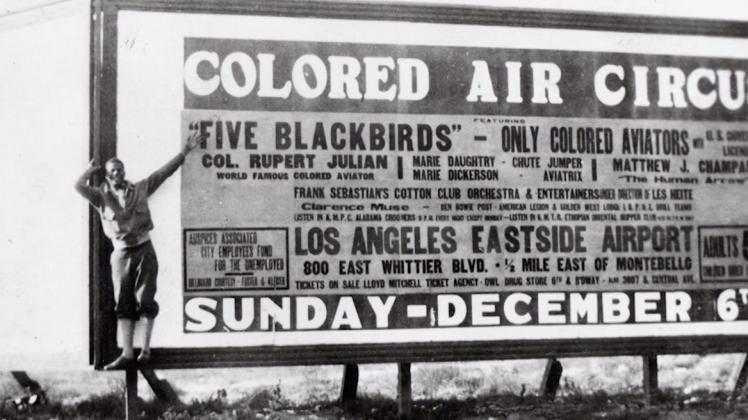 An advertisement for the Five Blackbirds, circa 1931. Blue Sky Metropolis 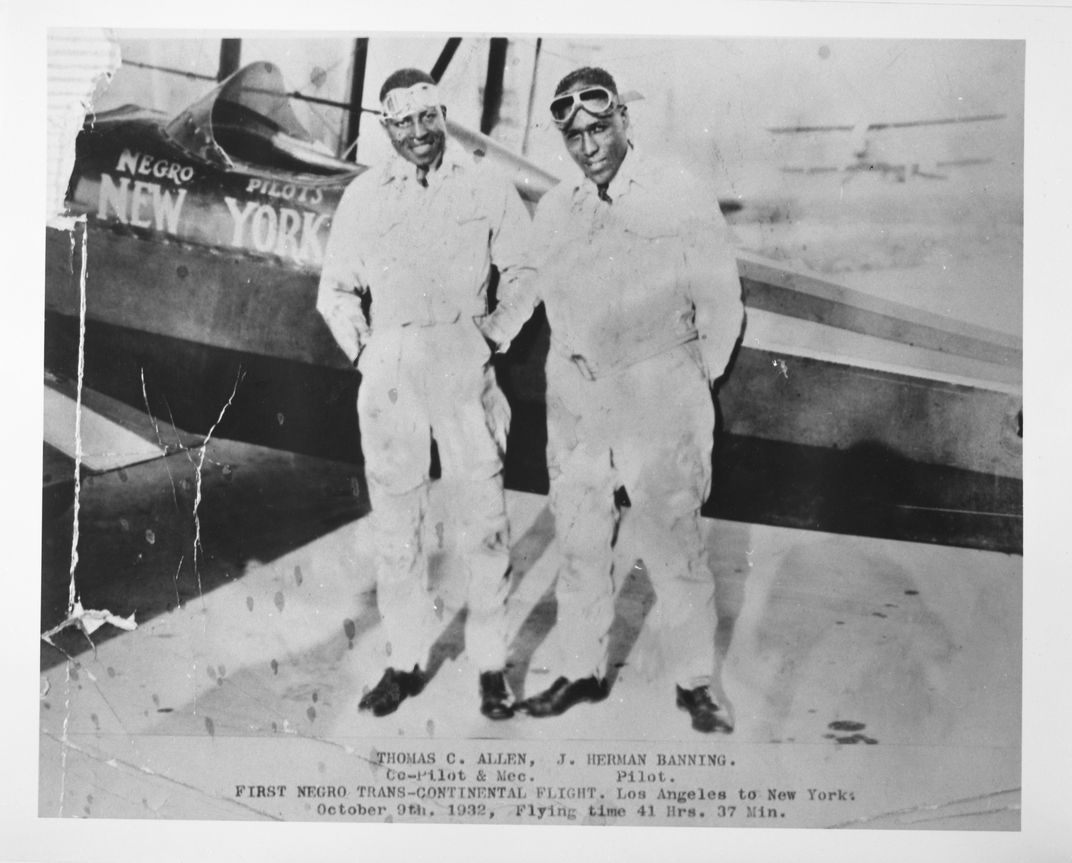 In 1932, The Flying Hobos (Thomas Cox Allen and James Herman Banning) became the first black airmen to perform a transcontinental flight (from Los Angeles to New York). By doing this, they "...set a new record for black pilots and paved the way for other pioneering black aviation record setters" ("James Herman Banning and Thomas Allen Complete the First Transcontinental Flight by Black Airmen." Smithsonian National Air and Space Museum). 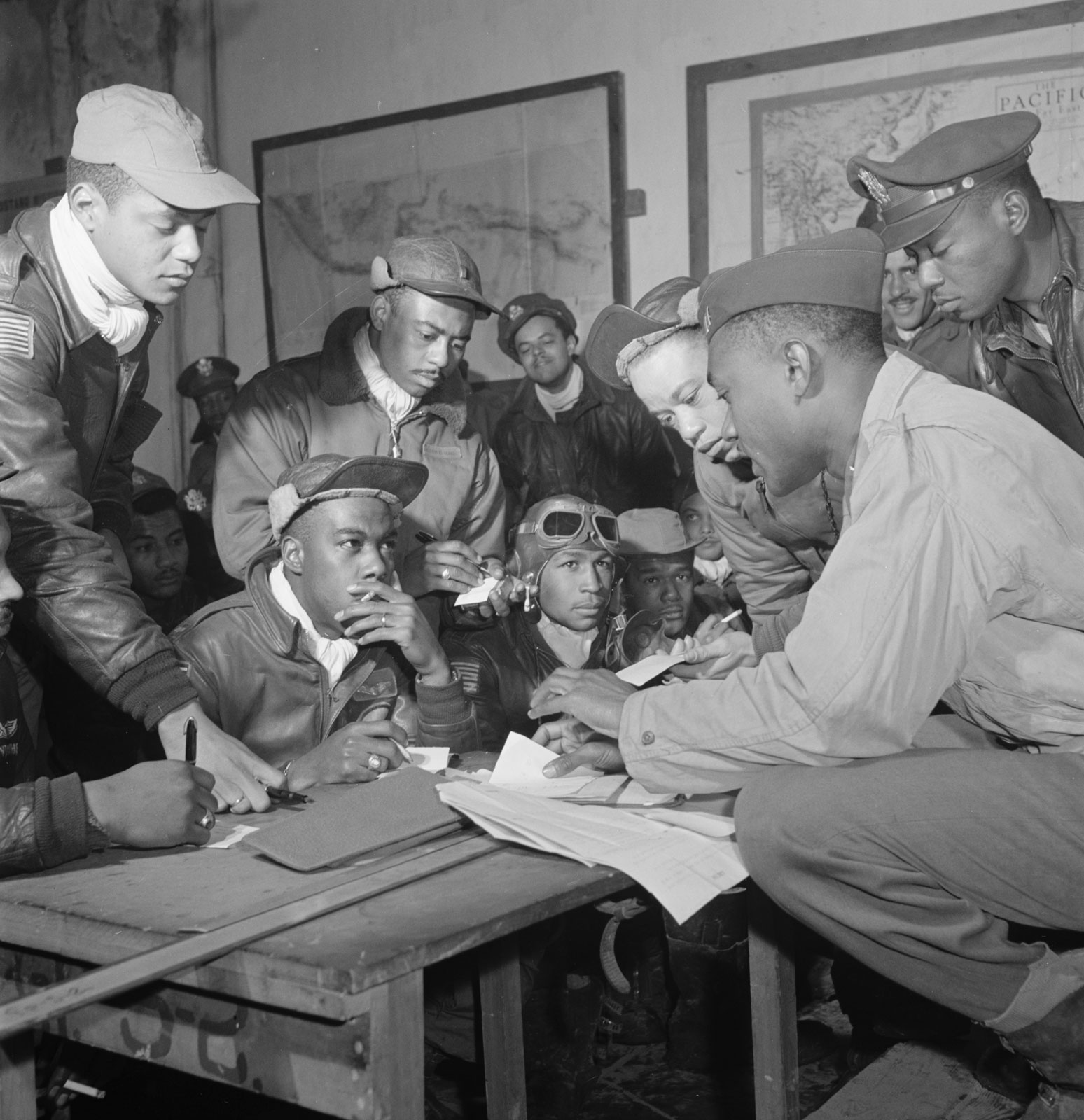 Members of the Tuskegee Airmen, circa 1945. Toni Frissell Collection/Library of Congress

The Tuskegee Airmen were an all-black pursuit squadron in the U.S. Air Force.  Founded in 1941 (15 years after Bessie's death), they formed the first African-American flying unit in the U.S. Military and served in WWII.

¨They may not have broken the sound barrier in their P-51 Mustangs, but the Tuskegee Airmen broke through the barrier that—until World War II—kept African Americans from becoming military pilots. In the process, they advanced the civil rights movement at home.¨ ("Tuskegee Airmen Shattered Perceptions in the Military and at Home." United Service Organizations)

In 1975, the Bessie Coleman Aviators Club was founded by a group of African American woman pilots in Chicago. Open to all women, their goal "...was to bring the thrill of flight to black and minority women who are seriously interested in aviation and aerospace" ("Tributes to Bessie Coleman." The Official Bessie Coleman Website).