Freedom of Speech and Artistic Expression

"The art always wins. Anything can happen to me, but the art will stay.” - Ai Weiwei, n.d., The Art Story Foundation

'"I hope my effort will be a part of making young people's lives better, to give them hope and to support the activities of future generations,' replies Ai, adding that he remains 'full of optimism' for both himself and China. 'The young people in China are, more than ever, experiencing a life in the new, globalized world. They have experienced much better life conditions and have more freedom than ever before. I think that will grow rapidly.'"- Ai Weiwei, 2015, "Ai of the Tiger: Sam Philips Meets Ai Weiwei in his Beijing Studio"

"In 2014, a number of young Chinese artists took part in an exhibition in Berlin. They told me: ' Ever day, we try to push the boundaries a little so that state control doesn't become overwhelming.'  They further explained: 'We hope to still remain able to highlight social grievances and depict the things that move us in this society.' " - Andreas Schmid, notable curator of Chinese art and pioneer of the Chinese art movement in Berlin, 2019, "Political Art in China 30 Years after the Tiananmen Square Protests" 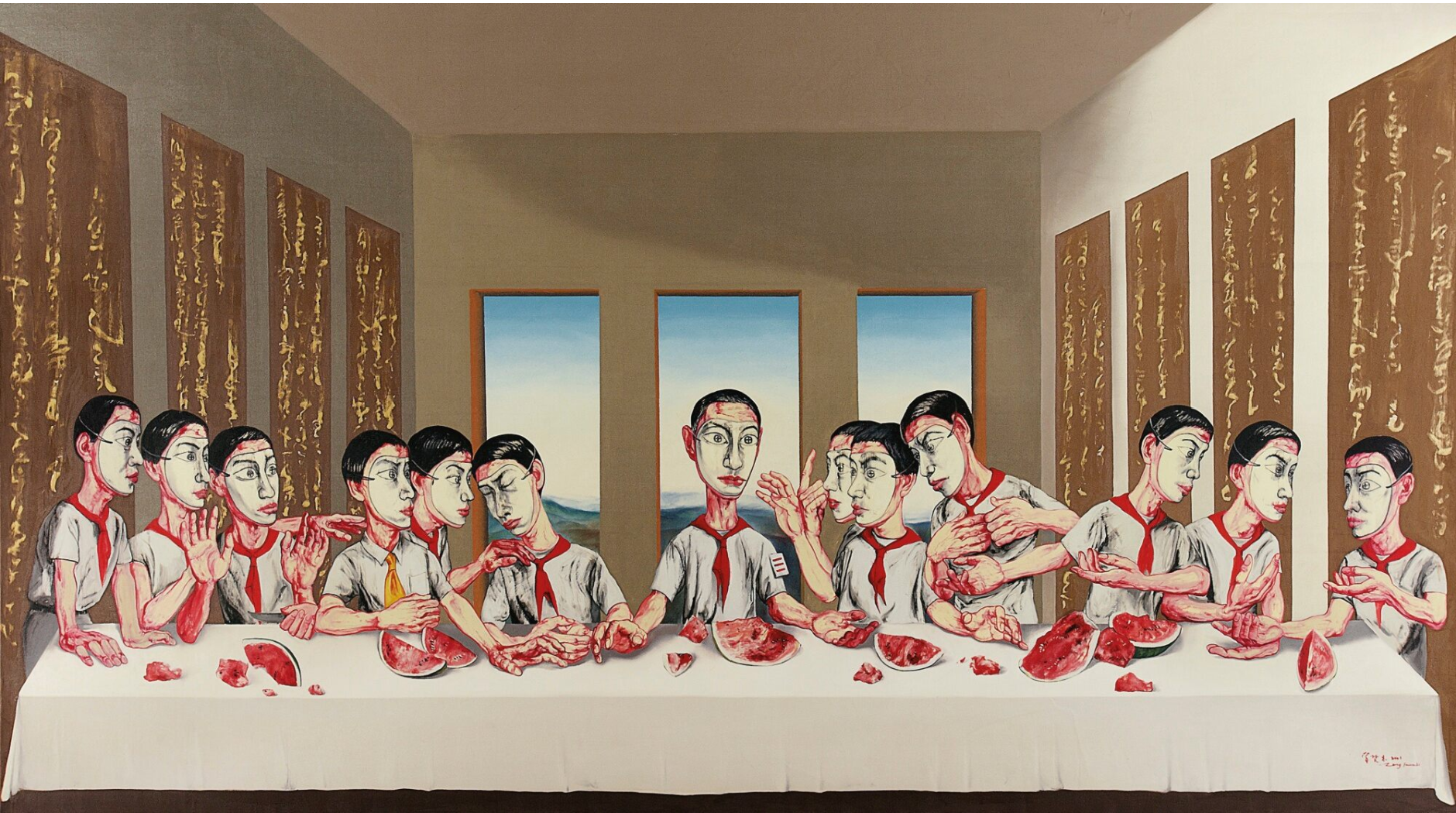 "The reinterpretation of a traditional religious setting into a classroom at once points to not only the dynamic of space in the work but also the overall notion of absurdity. The present piece is imbued with metaphors scrutinizing Chinese economic growth; the red scarves representing Communist ideals and a symbol of 'Collectivism', while a golden-tie-wearing 'Judas' is nestled in this cluster. To Zeng, this signified a departure from Communist ideals, commenting, 'The golden tie represents money and Western capitalism, and China only started wearing these ties after the mid-1980s.' In this way, to wear a tie thus unwittingly symbolized a transformation in Chinese society"

12 Square Meters was a performance piece conceptualized by Zhang Huan and photographed by a fellow artist and friend, Rong Rong. He coated his naked body with fish oil and honey and sat in the dirtiest and smelliest public toilet in the East Village for sixty minutes during the heat of summer. Although swarms of flies covered his body, Zhang Huan sat motionless, unflinching, like a Buddhist monk in such intense meditation that he is able to block out the travails of the physical world. In addition to an exercise in self discipline, the artist's performance protests the putrid living conditions in much of China, where public toilets such as this continue to exist in cities and towns in the "shadows of glamorous skyscrapers." Finally, Zhang Huan pays tribute to his friend Ai Wei Wei (another East Village artist) whose family was exiled to Xinjiang during the Cultural Revolution, and whose father was assigned to clean the public toilets every morning. 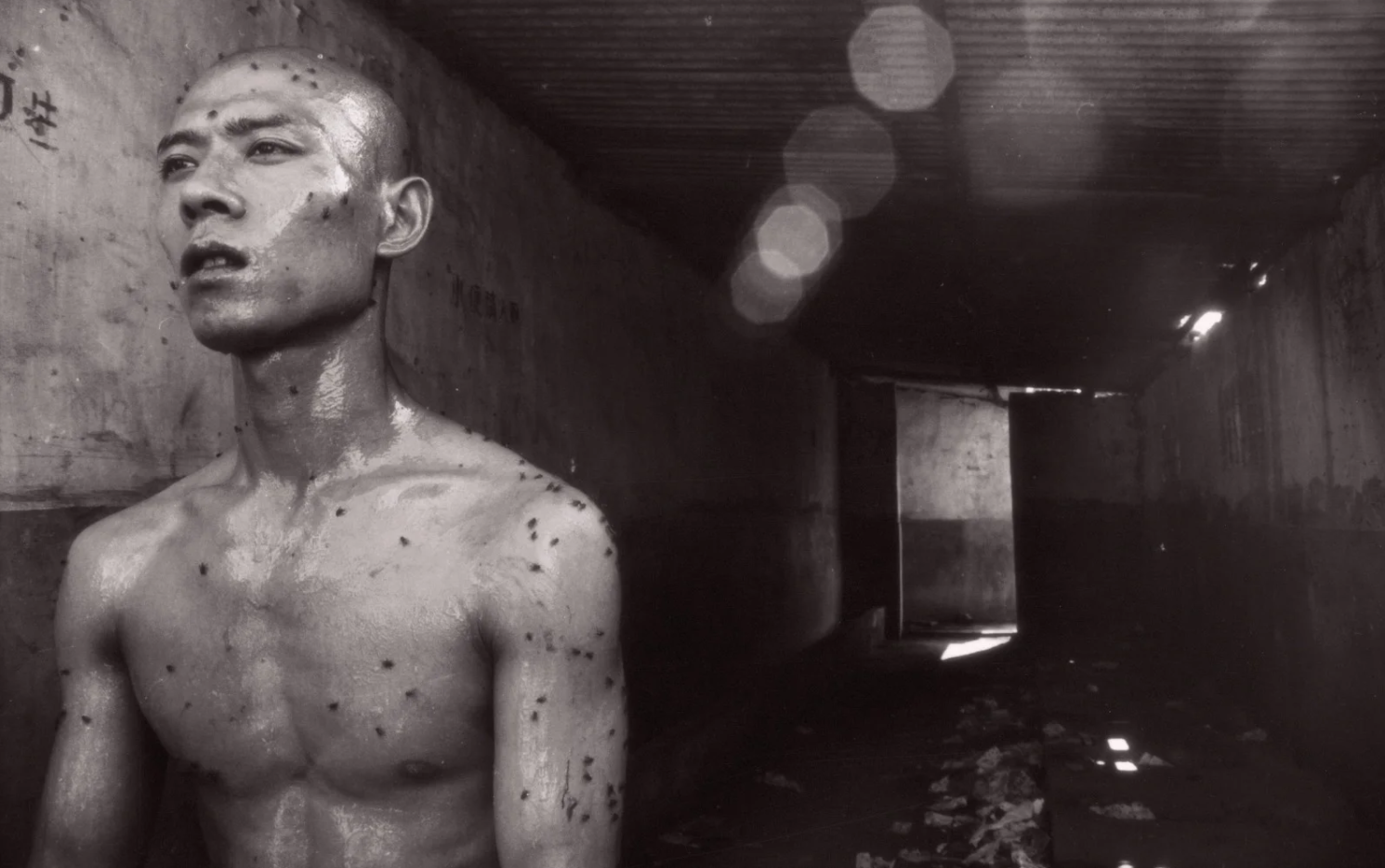 "In 2007, during the Face 2 Face project, JR and Marco organize the largest illegal photography exhibition ever. For this project, portraits of Israelis and Palestinians are pasted face to face, in monumental formats on both sides of the wall and in several Palestinian and Israeli cities.

When we met in 2005, we decided to go together to the Middle‐East to figure out why Palestinians and Israelis couldn't find a way to get along together... This holy place for Judaism, Christianity and Islam. This tiny area where you can see mountains, sea, deserts and lakes, love and hate, hope and despair embedded together.

After a week, we had the exact same conclusion: these people look the same; they speak almost the same language, like twin brothers raised in different families... farmer, a taxi driver, a teacher, has his twin brother in front of him. And he is endlessly fighting with him.

...We must put them face to face. They will realize." 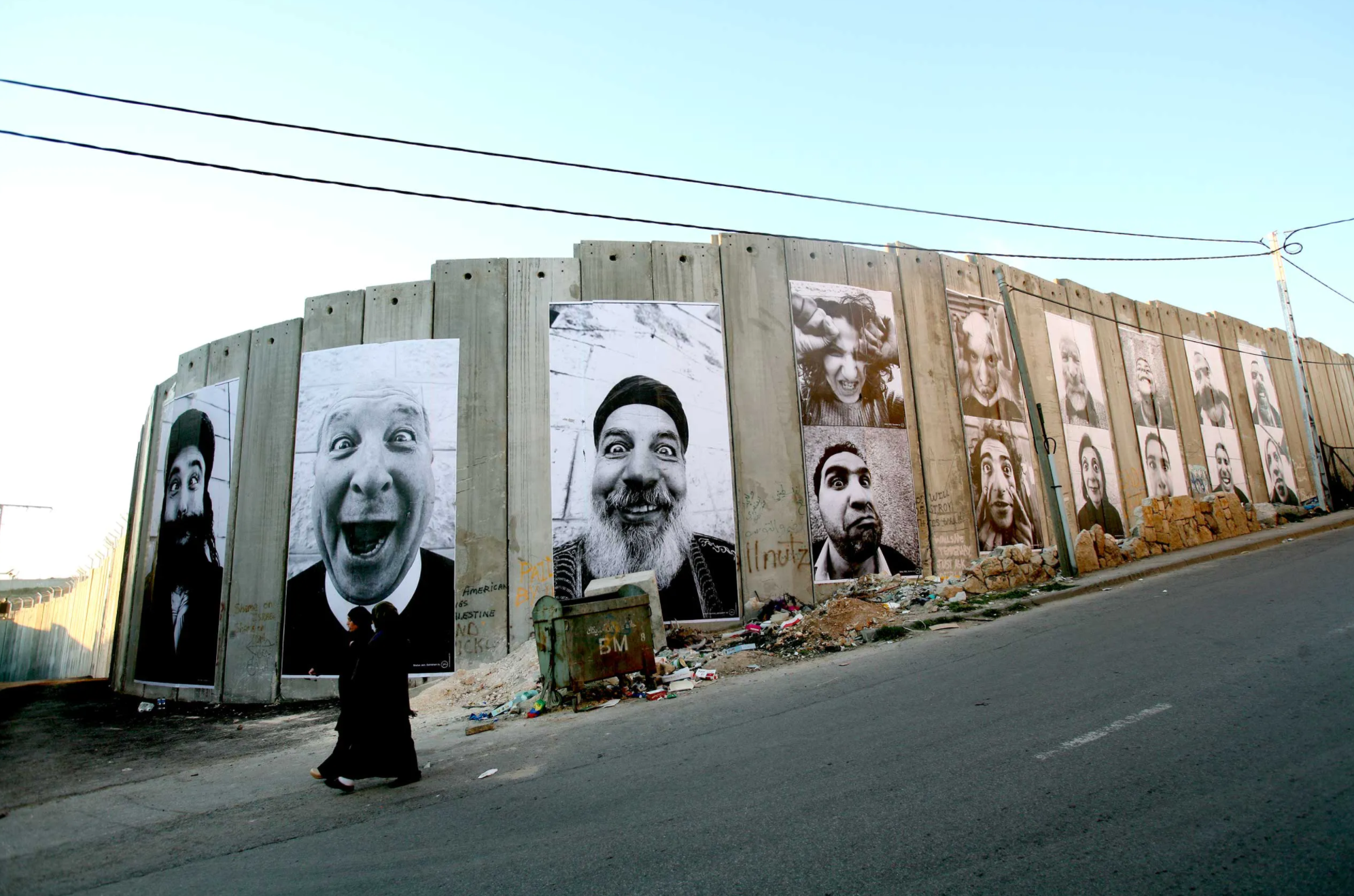 "Journalists who disagree with the government are often beaten and in some cases killed, while public demonstrations are brutally crushed and artists routinely imprisoned for "endangering the state. One such group of artists go by the name of Voina.'Voina' is Russian for 'war,' and true to their name, Voina are at war with the Russian government...

To the outside world, it seems that Russia is becoming more and more oppressive. So why aren't there more groups like Voina?
Oleg Vorotnikov: We aren't the only young people protesting. There are fearless anarchists, anti-fascists, and others. They remain unrecognized in the West, as they act anonymously and in secret.
Alexei: People here are really intimidated. Oleg, Leonid, and Natalia are brave artists, they don’t hide their faces and are not afraid of repercussions from the system.

​​​​​​​Do you think Voina could help inspire the promotion of democracy and freedom in Russia?
Oleg: Courageous young people appear in Russia because of people like us. We have a rule: every next action should be stronger, more impressive, and monumental than the previous one.
Natalia: It seems to me that the Russian authorities are impressed more and more every time. That’s probably why they want to destroy us so much."

To Inspiring Change To Conclusion