" [in] the times I grew up, it was commonplace symbol for The People, the sunflower faces the trajectory of the red sun, so must the masses feel their leadership. Handfuls were carried in pockets, to be consumed on all occasions both casual and formal. So much more than a snack, it was minimal ingredient that constituted the most essential needs and desires. Their empty shells were the ephemeral traces of social activity. The least common denominator for human satisfaction.
I wonder what would have happened without them?" - Ai Weiwei, n.d., The Art Story Foundation ​​​​​​​

While managing his civil investigation, Ai created his infamous exhibition “Sunflower Seeds” at the Tate Modern Museum in London. The work consists of over 100 million hand-made porcelain sunflower seeds arranged in a continuous square field. Each seed was created by a local artisan from Jingdezhen, China- a region that was historically known for its imperial porcelain. 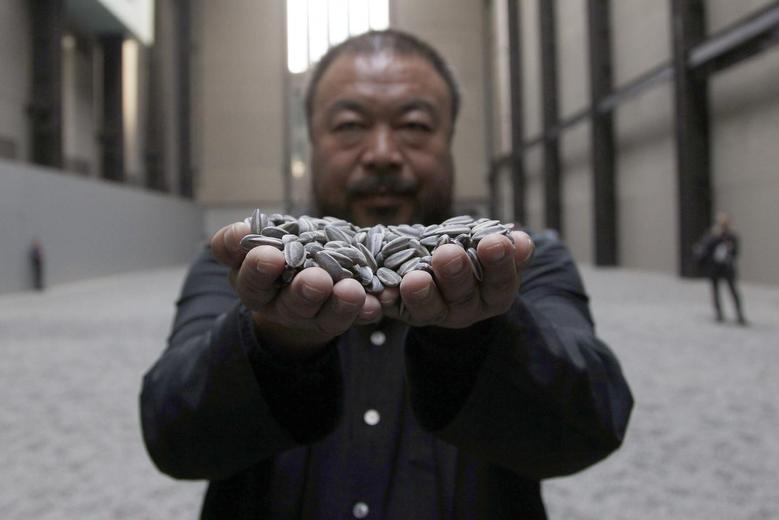 "Chinese artist Ai Weiwei poses for a photograph with his installation entitled 'Sunflower Seeds', at its unveiling in the Turbine Hall at the Tate Modern gallery, in London", October 11, 2010, Stefan Wermuthj

“The symbol of the sunflower was ubiquitous during the Cultural Revolution in China in the 1960s and 1970s, and was often used as a visual metaphor for the country’s Communist leader Chairman Mao (1893–1976) and, more importantly perhaps, the whole population. In Sunflower Seeds Ai examines the complex exchanges between the one and the many, the individual and the masses, self and society. Far from being industrially produced, the sunflower seeds are intricately and individually handcrafted, prompting a closer look at the ‘Made in China’ phenomenon commonly associated with cheap mass-produced goods. The myriad sunflower seeds – each unique yet apparently the same – can be seen to evoke the quest for individuality in a rapidly transforming society.”

Communist party supporters often depicted Mao as the sun with the people, like sunflowers, turning towards the sunlight. The uniformity of each seed communicates a sense of conformity and censorship in China, as one seed is quickly lost amongst the masses. “Sunflower Seeds” serves as a commentary on the “Made in China” phenomenon that is commonly associated with mass-made goods. Each seed represents a poorly paid laborer that fuels the increasing global consumption of mass-made Chinese products. ​​​​​​​
​​​​​

After Sunflower Seeds, ​​​​​​​the culmination of Ai's radical works would prove to be too great a threat to the Chinese government. The widespread international fame that Ai was now receiving would spur multiple attempts to silence his voice.

To RememberingTo Resistance and Retaliation